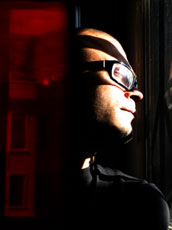 Born in Holanda, this dj and producer has been growing his spanish-caribbean roots alongside the Mediterranean. In 1999 from Formentera get established in Dusseldorf, where he starts developing a mixture of warm and organic sounds with electronic and more cold beats. This experience gives him an absolute personality when djing, becoming one of the reference downbeat dj´s in south Spain.

He has been playing in places like Observatori 2003, Evantec, Eclectic, Festival Este 2004 & 2005, sharing line up with people like Richard Thair (Red Snapper), Andy Smith (Portishead) or Daddy G (Massive Attack).