Colombian illustrator-animator Omar Alonso likes to use multiples resources in his creations. Mostly he includes surreal elements in atmopheres and characters of his imagination.

One more time the versatility derived from a netlabel creative platform is demostrated with [Miga_v17] "Laberinto máquina". The idea came about from Omar himself during production of an animated project for one of our artist, in this case Intelec; and secondly, the idea has been implemented resulting in two fantastic animated pieces. 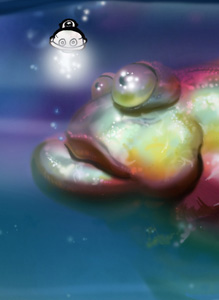 With his permanent aim to transform ideas into images, Omar Alonso has been familiar with pencils and brushes since he was a child. He studied Visual Arts and later Television Production and Multimedia.

This mixture and the exploration in the handling of the audio-visual items links him to the route of the animation. Creating, up to now, short tracks provided of visual elements that take the audience into surrealistic atmospheres.

He loves the sea and all the colors that appear on his way.