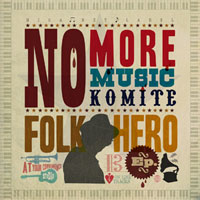 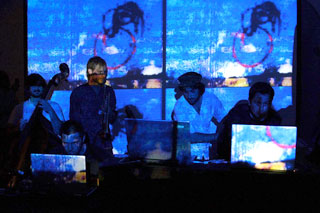 Collective project arising from many recording sessions, being after processed and transformed by F.Calderón (Calde), with loads of musicians known along his career as member of several bands like Henry, Dub Explosion Soundsystem, Ursula, El hombre burbuja,... as highlight, the sessions with Chuchi Cabral playing the counterbass and Rafa Musthapa playing trumpets, being this formation the current for live sets, together with Julio aka Coolershaker and F.Calderón taking care of the effects and electronic arrangements.

No more -music komite- is a musical project focused on the audiovisual field; creating several soundtracks, where we can note the one for the awarded documental film "Maldita Calle" (2004) or "Incha Allah" (2003) and the credits music of the co-production spanish & peruan "Canone, el árbol de la vida" (2002)... also to name the recently created video for the Octopus french skate collective "Roue Libre" (2008).

Back in 2005 together with some designers and video artists from Cádiz they built the audiovisual & design experimentation workshop Emotive project, performing various projects, where we can highlight: -several multimedia installations: "Versus", exposed in several places, such as CAAC in Sevilla, Amsterdam, Vigo, ... "Orgánicos" inside the XLIII Plastic Arts Meeting Caja San Fernando in Sevilla. -compositions for a series of different motion-videos, some of them selected for different animation and short-film festivals inside and outside Spain ("Helvetica", "Big bang", "Soñando Sueños", "La belleza del caoss"), the theme for the first GAZ-MAG multimedia magazine DVD, etc... -video show Looping Safari created for the Dance Festival in Cádiz.

Among his parallel projects, there is Dub Explosion Soundsystem (formed in Gent, Belgium in 2002 together with J.Puyana) which is currently finishing the recording of their first vinyl together with McFlare (Germany) and Saimn I (Belgium), and the web about musical creation and exchange Amplicrew.